Gerard Chambers {About}: Going the extra mile, every time~ 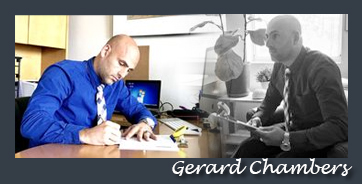 Gerard Chambers is a clinical neuropsychologist that assesses children, adolescents, and adults with a multitude of neurodevelopmental and neurocognitive disorders. He has also spent a great deal of his clinical experience evaluating children and adolescents that possess significant behavioral issues in both inpatient and outpatient forensic settings. Gerard Chambers trained under renowned behavioral psychologist and Autism Expert Dr. Charles Stevens. Dr. Stevens is the psychologist that worked with the original “Rainman,” the basis of the 1980′s movie that highlighted the life of the “Autistic Savant.” Dr. Stevens completed a large portion of his training under Joseph Wolpe M.D., and this training heavily impacted how he trained and subsequently supervised Dr. Chambers. During his extensive training to become a clinical neuropsychologist, Dr. Chambers was charged with performing neuropsychological evaluations for those needing to be diagnosed with an Autism Spectrum Disorder and other neurodevelopmental disabilities. He completed two years of HCG approved didactic training at Palo Alto University and two years of post-doctoral neuropsychological supervision with Neuropsychological Associates in Santa Rosa, CA, and in Fairmont, and Highland Public Hospital, part of Alameda Health Systems to become a clinical neuropsychologist.

Dr. Chambers also has an extensive background as a forensic neuropsychologist that will be explained in more detail here.

Dr. Chambers has also been employed as an adjunct faculty for Eastern Florida State College since 2004, teaching online, on campus, and hybrid classes in the subject areas of Abnormal Psychology, Human Adjustment, Developmental Psychology & General Psychology.

“Teaching is something that I love to do, for I was blessed with some of the most caring and talented teachers anyone could have asked for, and now it’s my turn to give back!”

“I have never before in my life witnessed such hard work and sacrifice that our servicemen, servicewomen and their families put forth on a daily basis.  Each and every one of them is a shining symbol of Freedom, here, and throughout the entire world.” – Thank You[/vc_column_text]